There are 4 factors currently affecting the Iran pistachio market

Dollar’s instability has affection on Iran pistachio price,Due to the Iran-US dispute and the announcement by the United States about the imposition of sanction against Iran, created a psychological climate, with the dollar rising to 180,000 Rials last month.

With the replacement of the Central Bank chairman of Iran and the change of central bank policies, as well as the emphasis of 4+1 countries (Germany, Britain, France, China and Russia) in the absence of the United States in these sanctions and declaring support for Iran, the price of the dollar fell to 140,000 Rials.

But given the fact that today all the sanction against are being revoked by the United States, it can cause changes in the price of the dollar, which causes uncertainty and confusion among Iranian traders.

In 2017-2018, Iran pistachio production was reduced by more than 70 percent due to untimely cold and warm weather , the highest reduction in pistachio harvest has occurred in Kerman province , the largest and oldest center of pistachio, most of the old pistachio exporters used to buy pistachio from this province.

That’s why supplying the product to export pistachio is hard this year.

3-Governmental directive on the return of the export currency

The Iranian government has announced in the circular that the currency derived from the export of Iran pistachio must be sold on a stock exchange under the supervision of the government; in the government exchange.

They are known as smugglers , and this has been a concern for exporters, because if a dollar is traded in a stock exchange , each issuer will cost about 60,000 Rials per dollar.

Last year, most Iran pistachio merchants bought pistachio in credit from farmers and they paid them after sale of the product, this year because of a shortage of pistachio, farmers only sell their pistachios in cash. 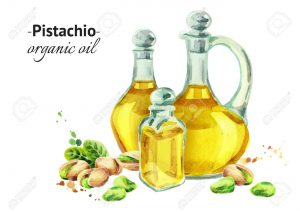 Do you care about your health?
Do you want to look younger?

If yes read this:
• One of the greatest pistachio product is pistachios oil which is used in Hygiene and cosmetic industries, in the provision of various creams, lotions, shampoos for hair, skin and eyebrows, here are some uses of pistachio oil
• An excellent moisturizer that is quickly absorbed by the skin .
• Use of pistachio oil to heal surgical wounds .
• Takes skin rejuvenation and prevents it from wrinkling .
• This oil because of its rich vitamin E, protects the skin health and repairs the skin cells .
• Using this oil has a wonderful effect on treating articular and bone pains .

• This oil is amazingly good for the hair It strengthens the hair, makes it thick, soft and clarifies and it is very beneficial for damaged hair.
• Nail Strengthener.
• Iran Pistachio oil is also used for the face and body massage .

• Pistachio oil is used as a flavoring and condiments oil in foods and many salads .
• it easily blended with (Balsamic Vinegar) and honey, and giving it a very good and unique taste .oreo thins.

If you care about the health and well-being of your body, we will offer you this oil. 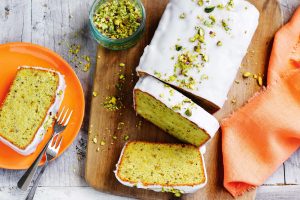 A pistachio cake is a green, tasty and nourishing cake. If you try it once, you will love it and you’ll never forget the taste

Stay with us to teach you how to cook this delicious cake.
here’s what you need

To prepare pistachio cake, first turn on the oven to 180 degrees.

Mix the flour with baking powder and sift three times.

Egg yolks and whites are separated. Mix yolks with sugar and vanilla

Add the melted butter and mix it with an electric mixer. Then add half a pistachio powder and mix them all together

Then add the other half of pistachio powder to the flour and mix it. After that add milk and flour in 2 or 3 steps

Pour the pistachio paste into greasy and brushed mold, put it in the oven at 180 ° in the middle floor for about 35 to 45 minutes.

Your cake is ready

In Iran we use nut for meal ,but the best of them, love pistachio

Pistachio is one of the tastiest and healthiest nut and has lots of benefits for the body health especially the presence of healthy fats, rich proteins, and various antioxidants has made this small seed to an appropriate food for weight loss and improved heart and intestinal health.

In each ounce or 28 grams of pistachio, containing about 49 pistachios, contains 156 calories, 8 grams of carbohydrate, 6 grams of protein, 30 grams of fiber and 12 grams of fat, with 90 percent of these lipids are good for the body.

Also, this amount of vitamins and minerals in pistachios can provide 24% of vitamin B6 daily, as well as 18% copper, 8% potassium, 14% phosphorus, 16% thiamine and 17% manganese per day.

High levels of vitamin B6 in pistachios have the essential functions, including The regulation of blood glucose and the formation of hemoglobin (a molecule that sends oxygen to the red blood cell).

Pistachio is also a rich source of potassium, and the amount of potassium in 28 grams of pistachios is more than half the size of a large banana.

Despite the great benefits of many types of nuts, their calories are generally high, but pistachios are the exception. Every 28 grams of pistachios have only 156 calories, if the same amount of walnuts contains 183 calories.

In terms of protein content, pistachios have the highest levels of protein after almonds, as 20% of pistachio weight is protein.

Pistachios contain essential amino acids forming protein blocks. Some amino acids need to be present in the diet of the individual and the body can not make them. Arginine is one of these amino acids that accounts for 2% of the amino acids in the pistachios from this group. This amino acid in the body converts to nitric oxide and improves blood flow.

The strike of truck drivers ended and the transport system returned to normal.

But they are resisting against decreasing pistachio price same as currency price,The most alarming news for the big traders is the announcement of the Iranian government that said all export income (currency like dolor) must return back to Iran and sales it at a governmental (secondary) price rate (of about 100,000 Rial for us Dollar), some traders have given up their pistachio exports after this rule.

Last week, Iran pistachio trade faced its lowest level in the past year.

The main reason is the sharp decline in the Rial rate against the dollar.

Due to the one side withdrawal of the United States from the nuclear deal with Iran and the imposition of economic sanctions against Iran, during the past year, the price of the Rial against the Dollar fell from 390 thousand Rials in last year to 170,000    in last week , so farmers raised their pistachio price   to related to this rate .

This raised Iran pistachio prices to related us Dollar  rate.

In  past week, with the announcement of Europe in support of Iran  to  establish of a new money transfer system for Iran, and also the adoption of new laws that increased the authority of the Central Bank of Iran.

But Farmers are refusing to rebound their prices, so traders and exporters are waiting for a stabilization of the price range of the dollar rate and their do not decide on the deal.

We should add that this year, Iran has been severely crippling pistachio crop, and because of the lack of supply, it tends to see a tendency to sell at high prices on the market.

At the moment, the highest purchasing pressure on the Iranian pistachio market comes from the Indians, due to the closeness of the largest Indian festival, Diwali.

On the other hand, in the past week, truck drivers in Iran have been striking, which has disrupted Iran’s transportation system and, as a result, Iran’s exports to other countries, and still not all drivers have returned to their jobs. The pistachio production of year 2018 and the warehouse.

The Iranian Pistachio Association’s preliminary forecast is that the total Iran pistachio production  will be 55 thousand tons in a new year.

As noted above, this dramatic decline in product in 2018 due to climate shocks in the winter and spring of this year.

The highest reductions in the amount of Iran pistachio production in Kerman province have been experienced since the previous year, while other areas of pistachio work better and their reduction will be less than Kerman.

According to the Iranian Pistachio Association, the amount of transshipment from the year before 2018 is about 35 thousand tons.

This amount transshipment is due to a shortage of crop and also because of high increases in the dollar against the Rial.

Since pistachio is an export product with a dollar price, Iranian merchants and gardeners are considered as currency equivalent during inflation, in order to avoid the effects of the depreciation of the Rial.

The total amount of pistachios exported from Iran and the United States to the Far East has been increasing, rising to 145 thousand tons in 13 years from 24 thousand tons in 2003, which represents an increase of 516 per cent in demand.

The amount of pistachio imported to the Far East from the sum of the countries of Iran and the United States is consistent with the amount of pistachios exported from Iran, and only in a few years of low pistachio production, the American pistachio filled the supply gap. This circular graph shows that “Far East” is a major destination for this year’s pistachio.

Of course, Seems the Indian market in a match with the ” Commonwealth of Nations” and the European market will take them over and it will take a larger share of Iran’s pistachios than in the past.

Finally, according to available information, it is expected that the total pistachios available today will not have a significant chaos compared to last year.

Harvest of Iranian pistachio started one month ago, harvest time of pistachios are different on varieties and regions:

Our processing factories are located next to the pistachio trees in pistachio growing regions in Iran.

The hardest part of work is buying pistachio , in Hiva Bazargan Pars  factories  we have experts how carefully buying pistachios ,you will be amazed when you see how we care about quality .

When fresh raw Iranian pistachio comes to the factory it goes for hulling process , after hulling we control moisture and it decrease to the standard level , we do it with special machine but also its available by sun ( sun dried).

As you can see on this video we show dried in shell pistachio processing machine how separate close mouth(un open) pistachios ,final production  will have less than 5% of close mouth pistachio also this machine separate pistachios that they are small (out of standard).

In next station we care about other pistachio quality elements , with high trained staff we separate unacceptable pistachios to above standard level.

We inspect pistachios in some elements such as stain , mould , insect ,foreign materials and we separate(as a rejection) unacceptable ones .

We have packing factory in Tehran province , Tehran is capital of Iran.

We transfer our processed pistachios for packaging and storage to this factory. we care about costumers packaging needs.

All customers around the world before buying from us can come and see our good product in our packaging factory , also when they buy ,before shipment they can come and inspect their order to be in a right place.

According to market reports , in this year(2018) Iran pistachio crop will be even less than previous forecasts.

Despite of decrease in Iran crop amount we have access to good farms.

You can see how good is our quality on this video.

We suggest to serious buyer that start to buy pistachio now. 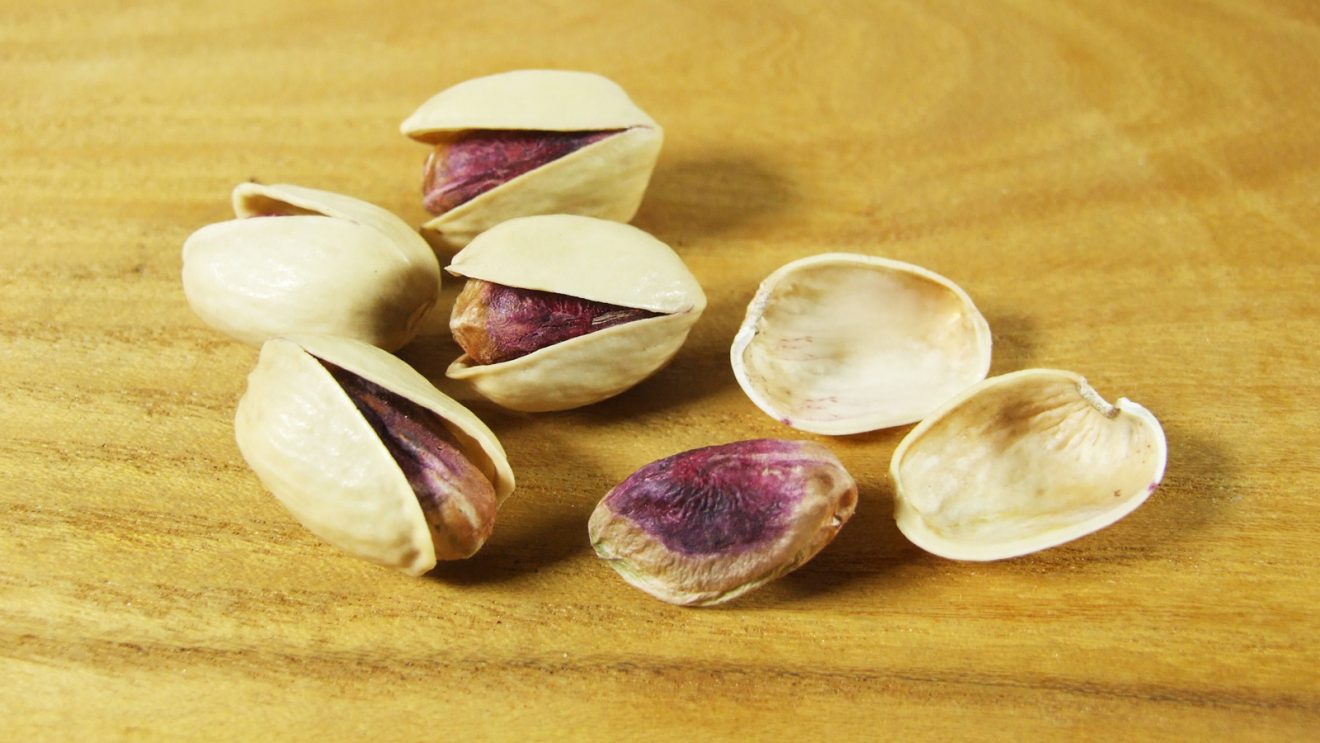 This pistachio is larger than Fandoghi (round) variety and blossoms early. Its trees are very sensitive to cold weather. Kalleh Gouchi pistachios are normally harvested in mid September.